What’s happening with the Ford Theatres construction,  you ask? To which we say: OMG SOOOO MUCH! The venue is really shaping up and we can’t wait to share it with you this summer. Click on the images below to get your own tour – no hard hat required!

The Ford’s indoor space was once home of the influential Lab and Taper Too play development programs.

Here is the foundation for the concessions and office building!

This elevator will serve differently abled patrons and artists, in compliance with the Americans with Disabilities Act.

The Ford’s historic Judeo-Christian features are being lovingly preserved during the renovation process.

Here’s a side view of the stage. Kinda gives new meaning to the “tread the boards” expression, right?

The claw working furiously on the new loading dock!

This is what the inside of the elevator looks like now…

A view from the iconic Ford towers… “A Rapunzel’s-eye-view,” one might say!

The crane in action.

This is where the dressing rooms will be.

A stunning shot of the Ford. Did you know the amphitheatre is on a County park?

Say hello to the support beams for the new sound wall!

All photos by Kim Kandel.

It seems fitting to be visiting architect Brenda Levin at her new offices within the former Macy’s Plaza complex downtown, where change is afoot everywhere you look.

Brenda is a renowned preservation architect responsible for reviving many of LA’s architectural gems, including the Wilshire Boulevard Temple, Griffith Observatory and the Wiltern, to name a few. Over the years, her work has subtly shaped the LA landscape by preserving its most cherished landmarks.

Brenda is at work again at the Ford Theatres, ensuring that Angelenos will experience the venue’s intimate natural beauty for generations to come.

“The Ford will be at once familiar, but also changed – mainly in the way you move through it,” she said, spreading out the plans for the future Ford Theatres, her pen busily dashing here and there, making notes on the margins. All around her, renderings and material samples gave me tantalizing clues to the venue’s revival.

“What’s special about the Ford is that as an audience member, you’re looking at nature,” she said. “At other venues, nature is behind you but with the Ford, the canyon is part of the backdrop.”

Rather than compete with the Ford’s architecture and natural backdrop, Brenda’s design takes its cues from it. For example, a dramatic new acoustic barrier that will dampen noise from the 101 Freeway will use a soothing green and blue palette interspersed with wood battens, creating an organic extension of the canyon.

Brenda had been to the Ford perhaps five times in the 30-odd years she’s lived in LA but this project has given the architect a deeper understanding of the venue and the role it plays in the LA arts landscape.

“What I didn’t appreciate until we had master-planned the venue was the County’s commitment to local artists in terms of capacity building,” said Brenda. “There are a lot of theatres in LA, but they tend to feature very well-known artists. I can’t think of another location where the commitment to diverse up-and-coming artists is that clear. [The Ford] represents a cross-section of the region.”

Brenda’s design reflects the Ford’s focus on local artists. Instead of a raked stage, Ford artists will now enjoy a new stage that is centered and level. Plus, there will be new dressing rooms, increased storage space and easier access to the stage for artists with disabilities. New lighting and sound equipment will also ensure that performers are given more flexibility to experiment and push the envelope – a bonus for audiences too.

Adding to the magic of an evening at the Ford is the new picnic terrace, which will accommodate 150 people and will include a new concessions building with full kitchen (for faster service and more food options – yumm).

There’s much more to the renovation, of course, like slope stabilization and a new loading dock, but these will be invisible to the casual visitor. “It’s not just paint, patch and repair. It’s more complex that it seems,” added Brenda.

What patrons will notice, however, is that the Ford’s iconic Neo-Judaic concrete structures will remain in place, as well as its distinctive wood doors (which are an artifact from its origins as the Pilgrimage Theatre). But, all around it, something new and exciting will emerge. I can’t wait to experience the transformation for myself!

The raiders of the lost Ford (a.k.a our awesome construction crew and production staff) have unearthed some exciting artifacts that offer a look into the Ford’s storied past. Looking at the treasures that have been uncovered, we can’t help but wonder about the story behind each one. Was it a famous actor playing Jesus in the Pilgrimage Play who used that spirit gum to apply his false beard? What rock ‘n’ roller imbibed from that vintage Coors can? What ballet dancer pirouetted in that decaying slipper?

What stories emerge for you? Let your imagination go wild and share your thoughts by commenting below, Tweeting or Facebooking us!

We thought you might be wondering what’s been going on in Ford construction land for the last few months, so we took a little break from our road trip to get an on-the-ground tour with Production Manager Arthur Trowbridge! Grab your hardhat, here we go!

How do you launch a blog about a theatre like the Ford? How do you encompass nearly 100 years of history – the Golden Era movie stars that slouched in its pews to watch Jesus and Faust fret upon the stage, the rock concerts that launched careers in the ‘70s and ‘80s, the beloved local artists who call the Ford home and the people, like you, who came from near and far for that quintessential summer-night-in-LA experience?

The best place to start is with the present. With a 352-ton crane poking out of the top of the theatre, you may be wondering what the heck is going on over here! Let me get you up to speed: the Ford is currently closed for renovation until the summer of 2016. Right now, we’re updating our technical systems and completely rebuilding our stage to fix longstanding performance and flooding challenges. This means you’ll be able to enjoy your favorite music, dance and film events enhanced by the amenities of a state-of-the-art theatre. When we reopen, our artists will have access to a new digital projector and the latest light and sound equipment, ensuring that they can realize their vision as fully as possible, regardless of budget. In a way, this renovation also levels the playing field – which is a big part of what the Ford is all about.

To capture the scope of the project, we’ve teamed up with photographer Alex Pitt to create a time-lapse video. Despite being less than half way through with construction, we asked Alex to compile what he’s shot thus far because it’s just too cool to wait ‘til next summer!

As you can see, the stage (now affectionately referred to as “the hole”) has been removed and in its place is a 20-foot-deep excavation site. Retaining walls, which ensure construction workers are safe from the hillside above, will eventually become a lush backdrop with “crossover” space so performers and technicians can cross behind the stage without being seen. Also, the new stage will be flat (not raked like the previous one) and its lower tier will have more square footage, per our dancers’ request. A new ADA-friendly elevator and ramp will also be installed, truly making the theatre accessible to performers and audience members of all abilities.

Stay tuned in the coming months as we share more renovation updates, interviews with Ford artists, a look back at our illustrious past and much more!

Fun Ford Fact:  According to one of our structural engineers, the concrete walls at the Ford are only 80% dry – even though they were built in 1930! 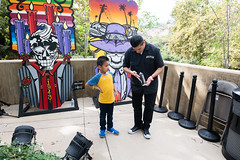 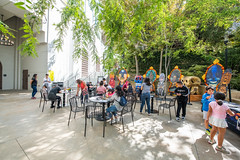 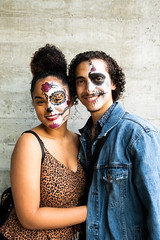 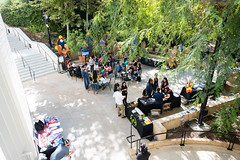 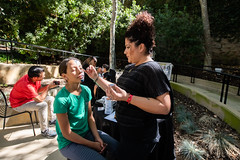